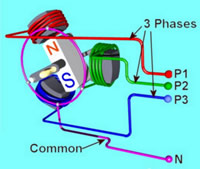 In a three-phase system, three circuit conductors carry three alternating currents (of the same frequency) which reach their instantaneous peak values at different times. Taking one conductor as the reference, the other two currents are delayed in time by one-third and two-thirds of one cycle of the electric current. This delay between phases has the effect of giving constant power transfer over each cycle of the current and also makes it possible to produce a rotating magnetic field in an electric motor.

Three-phase has properties that make it very desirable in electric power systems:

The phase currents tend to cancel out one another, summing 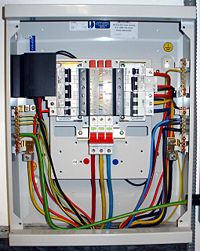 to zero in the case of a linear balanced load. This makes it possible to eliminate or reduce the size of the neutral conductor; all the phase conductors carry the same current and so can be the same size, for a balanced load.

Power transfer into a linear balanced load is constant, which helps to reduce generator and motor vibrations.

Three-phase systems can produce a magnetic field that rotates in a specified direction, which simplifies the design of electric motors.

It is precisely for this reason that it is so often used in the Commercial and Industrial properties. Whether it’s your local garage, shop,factory or office block you will most often find a 3 phase 415 volt supply. Extra care must be taken when working with this system as an electric shock from 415 volts can quite often be fatal, where as 230/240 volts, without RCD protection, in the majority of cases will just give you a hard belt.

Three is the lowest phase order to exhibit all of these properties.

The three phases are typically indicated by colors which vary by country, but in the UK are as follows.