Portable Appliance Testing (commonly known as PAT or PAT Inspection or PAT Testing) is a process in the United Kingdom, New Zealand and Australia by which electrical appliances are routinely checked for safety. The correct term for the whole process is In-service Inspection & Testing of Electrical Equipment.

When people work with

electrical appliances, health and safety regulations state that the appliance must be safe, to prevent harm to the workers. Many types of equipment require testing at regular intervals to ensure continual safety; the interval between tests depending on both the type of appliance and the environment it is used in.

Evidence of testing is clearly visible to workers in the form of ‘Passed’ , ‘Tested For Electrical Safety’ and ‘DO NOT USE after’ labels affixed to various parts of the electrical equipment they use.

Portable appliance testing and inspection however was conducted on a 3 month (high risk) and 6 month (low risk) cycle from the early 1960s onwards in government departments under the control of the Department of the Environment Property and Services Agency (circa 1970 to 2000) as the DOEPSA was known and prior to that as the Ministry of Public Buildings and Works (MoPBW) until about 1970.[citation needed]

Extensive record keeping was made into log-books and generally the equipment used was an insulation resistance tester, simple hand tools and visual inspection. This testing and inspection was done under a planned maintenance scheme and predated both the Health and Safety at Work Act 1974 and the Electricity at Work Act 1990 that are frequently quoted as the reason that PAT inspection is done.[citation needed]

In reality neither act nor their corresponding regulations detail PAT inspection as an obligation but rather state a requirement of maintenance of safety and evidence of routine maintenance of all hand-held, portable and plug-in equipment.

It seemed inevitable with the increasing amounts

of such equipment in domestic, commercial and industrial environments that the system employed for all government departments would become more formalized and adopted as a method for assuring safety of appliances in the world beyond the civil service departments.[citation needed]

Testing equipment specifically designed for PAT inspections was developed as mobile versions of the equipment used by manufacturers for testing their equipment at the end of the manufacturing process to ensure compliance with the relevant or corresponding BS (British Standard Code of Practice) for that type of appliance.[citation needed]

One other check carried out on high risk equipment such as hand held electrical mains drills class I equipment when issued from a government department stores was the Earth Yeading Test. This test passed a current of 25 A down the earth conductor (the c.p.c. circuit protective conductor as it is currently named) to substantiate that the earth was a sound and valid connection for safe disconnection in the event of a fault occurring. 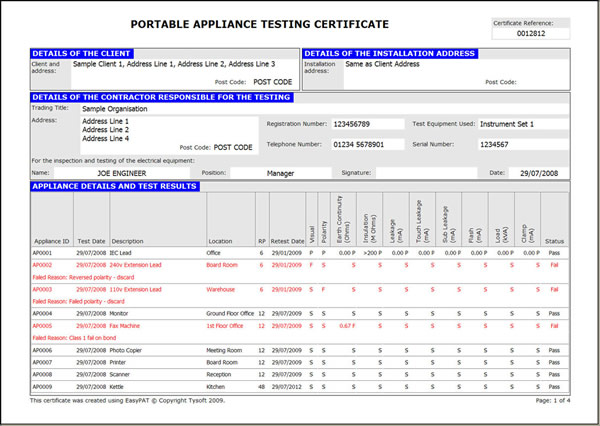 Regulations on who must have their equipment PAT tested
The Electricity at Work Regulations (1989) requires “All electrical systems shall be maintained so as to prevent, so far as is reasonably practicable, any danger”. This is interpreted as covering the fixed electrical installation as well as portable and transportable equipment connected to it. The Regulations also state “It is the duty of every employer and self employed person to comply with the provision of these Regulations.”

British law (the Electricity at Work Regulations 1989 in particular) requires that all electrical systems (including electrical appliances) are maintained (so far as is reasonably practicable) to prevent danger. Guidance from the Institution of Engineering and Technology (IET, published under the IEE brand) and the Health and Safety Executive (HSE) suggest initial intervals for combined inspection and testing that range from three months (for construction equipment) to one year for inspection and, in many cases, longer periods for testing (certain types of appliance in schools, hotels, offices and shops).

Electrical systems refer to the installation as well as all the appliances connected to it. A qualified electrician or someone that has PAT testing training must inspect the installation annually in any public building and/or a place that people work, private houses do not need this test. The maintenance of the appliances can largely be carried out in-house in many organisations. This can result in cost savings and more flexibility in when PAT testing is carried out.

The European Low Voltage Directive governs the manufacture or importation of electrical appliances. Compliance to this has to be declared and indicated by the display of the CE mark on the product. The responsibility for this lies with the manufacturer or the importer and is policed by the Trading Standards. However, it is important to have a maintenance regime for electrical appliances. The Electricity at Work Regulations (1989) requires that electrical appliances be maintained so that they remain safe during use. The implementation of this is up to employers. The HSE or the local authority is responsible for the policing of this.

Who can PAT test
If you are a competent person and have a basic knowledge of electricity then you can be perfectly capable of testing appliances for electrical safety. It is, however, recommended that an individual wanting to PAT Test attends a course related to the subject matter. There can be much confusion on what needs PAT Testing, what class an appliance is (and therefore which areas to test), and how often appliances legally need to be tested. Proof of a company’s competence in PAT Testing is usually found in the form of a course certificate or qualification. A formal examination process for the topic is operated in collaboration with EAL or City and Guilds (the awarding body) under the authority of the QCA (The Qualifications and Curriculum Authority) who validate and authorise the qualification.

In the UK, There is no requirement to have a formal qualification for persons carrying out PAT Testing. The Electricity at Work regulations of 1989 simply state that inspecting and testing must be carried out by a competent person, however does not mention a benchmark for competency. It has become accepted practice, however, for individuals operating as PAT Testers to hold a 2377-12 City and Guilds qualification.

User checks
Advising the user of potential danger signs can result in problems being picked up before they can result in any danger. For example, if the power cable is frayed or the plug is cracked, users need to be advised NOT TO USE the appliance and report the fault to a supervisor. This information can be put across, say by the use of a poster or in a memo. User checks are always carried out before operation, and the results are generally not recorded, unless a defect is identified. 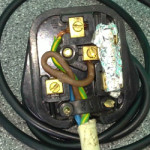 This is a process of simply inspecting the appliance, the cable and the plug for any obvious signs of damage. According to the HSE, this process can find more than 90% of faults.

Combined inspections and PAT testing
At periodic intervals, it is essential to test the portable appliances to measure that the degree of protection to ensure that it is adequate. At these intervals, a formal visual inspection is carried out and then followed by PAT testing. Note the inside of the plug MUST be checked unless it is moulded or there is an unbroken seal covering the screws (bad internal wiring or an unsuitable fuse would cause the item to be classed as dangerous).

The tests that an individual must carry out to declare an item electrically safe is dependant on the class of construction (shown below). Some of these tests are: