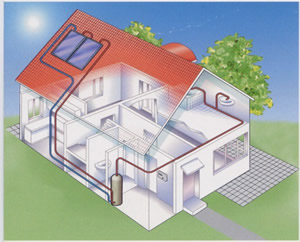 Solar thermal systems are considered the only ‘virtually zero carbon’ technology currently available on the market. A system uses a small amount of electrical energy to run the pump circulating the fluid, which is heated directly by the ‘free’ energy from the sun. Some energy is also used to manufacture and install the solar system and so no system is truly zero carbon. Some solar thermal systems use solar electricity (PV) to power the pump and so further reduce energy consumption. However, these PV powered solar thermal systems are normally low flow systems and the solar electric gains are normally offset by the solar thermal losses leading to no overall advantage. Please see this test report for more information by clicking here.

Demand for hot water is fairly constant year round which means that there is a significant demand for hot water when solar energy is at its peak in the summer months. Solar water heating systems can provide most of the hot water during this period as well as making a useful contribution in the less sunny winter months. Solar water heating can also make a contribution to space heating but this usually involves much larger systems, not least because the availability of solar energy is much less in the winter when heating is most required. Typically, in the UK, solar water heating is most economic when used to heat water for baths, showers, hand washing and other domestic hot water requirements. It is also very effective at heating swimming pools and has been used in industry, in hotels and for agricultural applications such as dairy farms.

A solar water heating system uses solar collectors, normally mounted on a roof, to capture the energy released by the sun to heat water. There are many variations in design of the system, but they all make use of the same principles.

The two main systems are either:

Another type of system, primarily used in the hotter areas of Southern Europe is the ‘Thermosyphon system’. This is a roof mounted system which not commonly found in Northern Europe as it is suited to hotter climates.

As far as we are aware, all installed systems in the UK are either a Drainback or Fully Filled system. Both these systems can be direct or indirect, with a direct system being one where the water used at the taps is circulated through the system, and an indirect system is one where a heat transfer fluid is used instead.

Different types of collectors
The collectors are one of the most important components of a solar system. Their main role is to capture the energy which the sun radiates to heat water for use. The collectors are generally mounted on a roof, but can also be mounted on walls. The optimal position for a collector is at an incline of 35Âºc to horizontal and facing south.

A house facing south gains the most exposure annually, however, collectors can be mounted on both the east and west facing roof space if your house does not face South, which is a duo-pitched roof system. Collector sizing must be considered in all applications and over sizing may be necessary where optimal levels of irradiation are not expected.

There are three main types of solar collector; 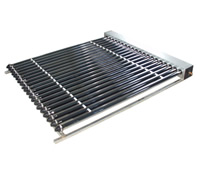 Both of these collectors are similar in appearance, but work in different ways. Both contain evacuated glass tubes which are mounted on a frame and connected by a manifold. Heat pipe tubes can only be installed vertically, but direct flow tubes are more flexible and can be installed both horizontally and vertically. Due to vacuum within the tube as well as other design factors, the Evacuated Tube collector tends to run at an efficiency some 10-15% greater than the flat plate collector. 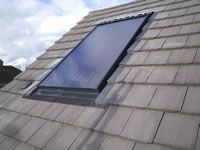 Flat Plate Collectors
These collectors are based on a thin absorber sheet, which is unusually copper, backed by a fluid tubing system all placed in an insulated casing with a glass covering. Fluid is then circulated through the tubing which absorbs heat from the collector and transports it to the heat exchanger. The insulated casing ensures minimal heat loss from the collector, which can reach efficiencies of 75- 80%. The transparent cover protects against weather damage and prevents heat from being carried away in the wind.

As these collectors are unglazed then absorb a high amount of the suns energy, however, they are not insulated so a high portion of the heat is lost, particularly on windy days. They are primarily used for heating swimming pools, where the pool water circulates directly through them.

Both the evacuated tube and flat plate collectors are used for Active Solar Heating systems for houses and other building types. The unglazed plastic collector is exclusively used for outdoor purposes, such as for heating swimming pools where lower temperatures are required.

Evacuated tube and flat plate collectors used for heating systems should have selective surfaces, which are good absorbers of the sun’s radiation, absorbing 90-95% of the solar radiation falling on them, but are also poor radiators meaning they lose less than 15% of the radiation falling on them. Non selective surface collectors absorb a similar 90-95% of the sun’s energy but are much more effective radiators, releasing up to 90% of the maximum heat efficiency.

There is not one optimal size for a collector, as it depends on a number of factors, such as: 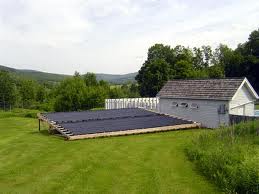 For domestic solar hot water systems it has been found that installing Â¾ of a mÂ² of flat plate collector or evacuated tubes for each person using hot water will give satisfactory results. Heat loss through the system will be larger the smaller the collector it is. This generally results in the average 3/4 bed household installing a collector of 3-4mÂ² of flat plate collectors and 2-3mÂ² of evacuated tubes, with a hot water cylinder volume of between 25-75 litres per mÂ² of collector area. To meet he domestic hot water requirement, one needs roughly 1mÂ² of collector area per person living in the property

Best Practice Guidelines
For a domestic installation, the following points are ‘best practice’ and should be taken into consideration for your system: