In the UK, domestic and small commercial or public installations usually have single-phase supplies at 230V (nominal standard). The main distribution boards in these installations are called consumer units (CUs), though they may be known as fuse boxes; older consumer units used fuses until the advent of mini-circuit breakers (MCBs). A consumer unit normally has a single horizontal row of fuses or MCBs, though some older units grouped four fuses in a square arrangement. For two-rate supplies (standard/off-peak), a second CU may be added (stacked). Multiple CUs are also found in larger premises.

In both cases, modern boards handling supplies up to around 100 A (CUs) or 200 A (distribution boards) use circuit breakers and RCDs on DIN rail mountings. The main distribution board in an installation will also normally provide a main switch (known as an incomer) which switches the phase and neutral lines for the whole supply. (n.b., an incomer may be referred to, or sold as, an isolator, but this is problematic, as it will not necessarily be used as an isolator in the strict sense.) 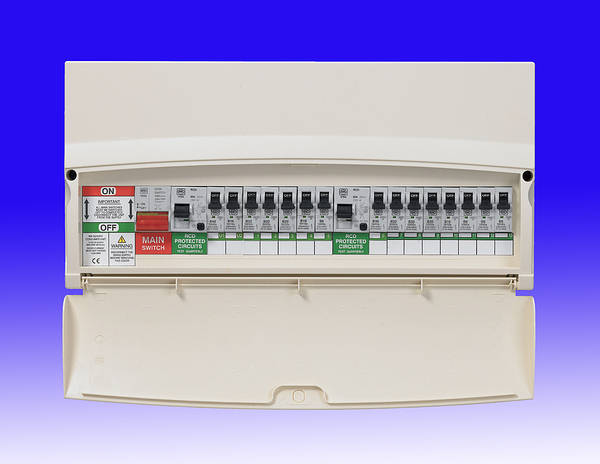 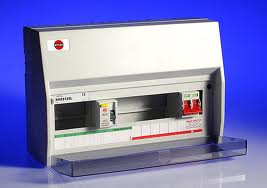 Recent (pre-17th edition wiring regulations) CUs would not usually have RCD protected sections for anything other than socket outlets, though some older CUs used RCD Incomers. Before the 1990s RCDs (and split busbars) were not standard in CUs.RCD protection types
With the introduction of the recent 17th Edition IEE Wiring Regulations consumer units in the UK must provide RCD protection to all cables embedded in walls excepting high integrity circuits such as those for burglar alarms or smoke alarms.

Consumer units have different methods of protecting circuits. A dual split-load consumer unit can be arranged as follows: 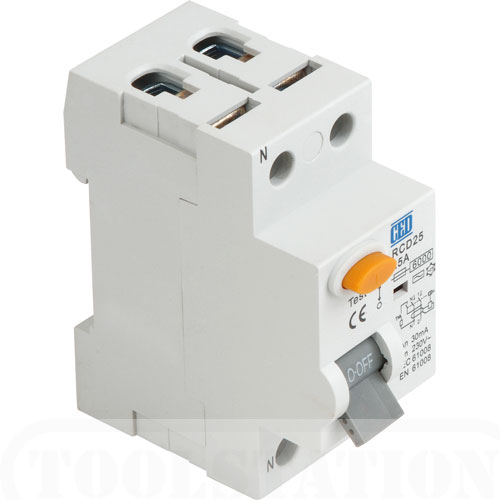 Circuit breaker retrofits
Some of these fuseboxes have had their fuse carriers replaced with plug-in miniature circuit breakers. These retrofit MCBs are typically rated at 3kA breaking capacity, but many homes or properties have prospective short circuit currents as high as 6kA. Fault currents of over 3kA are thus interrupted by the incomer fuse, should they ever occur, and the MCB would not survive. [citation needed] 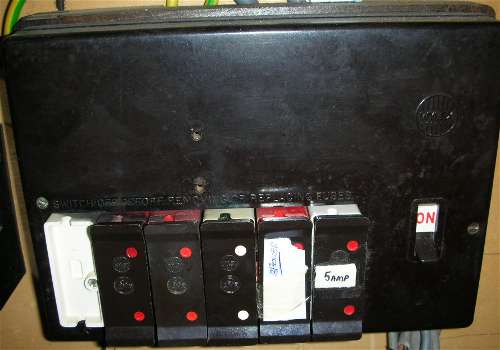 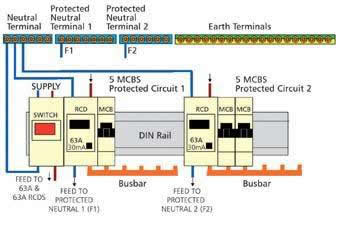 The MCB’s will be in descending order of value, i.e., 40amp, 32amp, 32amp, 16amp and a 6amp. And that the MCB’s on the left hand side of the board will have their corresponding neutrals attached to the left of the two neutral bars. It is important to note that if you have even one of the neutrals from the left side going into the right hand bar the board will never power up properly and you will always have nuisance tripping if you can even get it to stay on for longer than a few seconds.The incoming earth wire connects directly to the earth bar on the top right of our diagram to which all the other earths are connected to.